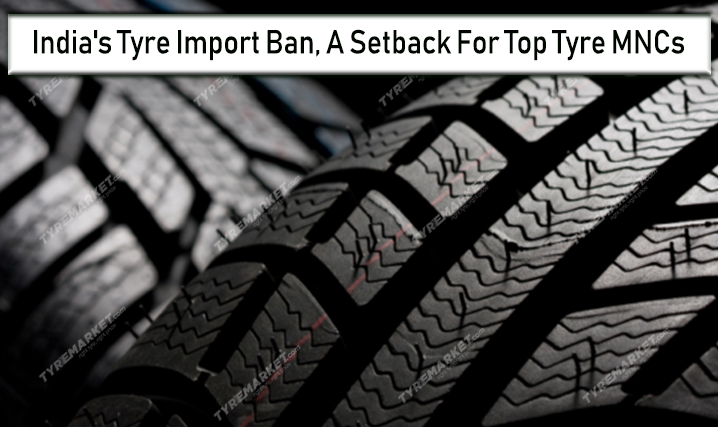 In a move to boost domestic companies, the Government of India introduced a ban on the import of tyres in June 2020. Companies willing to import tyres need a restricted license and permission. It means that there can be a limited import of tyres when the government issues the import license.

The restriction was laid upon the import of tyres for cars, buses, trucks, and motorcycles. Both tubeless and radial tyres were banned from import. Since tyres come under the restricted category, the improper would need a license or permission. With the “vocal for local” initiative coming in effect, MNCs are now facing restrictions that have led them to rethink their investment plans in India.

The company will also be limiting the supply of passenger-car tyres to its channel partners. However, Michelin India will continue the manufacturing of two-wheeler tyres at its Madurai plant and truck/bus radial tyres at its Chennai plant. There’s a special agreement under which Michelin can develop tyres at these two locations.

Unlike Michelin India, companies without a manufacturing unit in India find it difficult to survive the import restrictions. Pirelli and Hankook are two prime examples. Since the ban, both the companies have curtailed their operations in India with Hankook refunding money to its channel partners. There will be no operations from their end until further notice from the government. It would be challenging for both the companies to decide whether they want to invest at a manufacturing facility in India. The decision for the import restriction came at a time when the Indian companies were struggling due to the COVID-19 pandemic.

Luxury car manufacturers like Mercedes-Benz, BMW, and Audi have been given relaxations for importing speciality tyres for their cars. These tyres are not manufactured in India and thus, imported from East Asia and Europe. “At present, we have some clearance to import tyres for our requirement, but there is a lot of delay in deliveries. There is a serious supply shortage in the aftermarket,” says a senior Mercedes-Benz official. However, this has also led to s shortage of tyre supply, resulting in delayed deliveries to channel partners and customers. BMW, on the other hand, is only importing tyres that will fulfil their current production capacity. Their primary purpose is to meet their ongoing requirements without any focus on aftermarket scarcity.

The tyre import ban is aimed at rebuilding the Indian tyre industry. The pandemic had devastating effects even on the luxury car segment, with car sales going down 40% compared to 2019. While OEM requirements are immediately met, dealers are facing issues with providing high-performance tyres. Because tyres are not available, the prices are also seeing a surge as the stocks deplete at a rapid pace.

A massive amount of imports came from China, Thailand, and Taiwan. They were cheap, and the quality was not at par with the industry standards. It was a contributing factor to the government’s policy on restricting the import of tyres. With this, the domestic tyre manufacturers are now reporting 100% capacity utilization as the demand for local tyres multiplies. However, Maruti and Hyundai can only import tyres for cars that are being exported to multiple countries.

One company that is making the most out of the tyre ban, is Yokohama. By mid-2020, the company had a second stream plant with a capacity of producing 4,000 tyres per day. It is manufacturing tyres only for the domestic market and launched several products specific to the road conditions of India – like the BluEarth series. Yokohama is expanding its reach in tier 2 and tier 3 cities, increasing its channel partner base and aiming to reach 6% market share, which is 50% more than its current portion.

Yokohama Rubber Company acquired Alliance Tire Group (ATG) in September 2020 to expand its production capacity. The new plant will be opened in Visakhapatnam and will focus on producing off-highway tyres. It is scheduled to start its operations by 2023. ATG has plants in Dahej, Gujarat and Tirunelveli, Tamil Nadu. By acquiring ATG, Yokohama multiplied its production capacity by 1.6 times and started serving off-highway tyres to the Indian market.

A caveat to this is that ATG’s 90% production goes for export. The company fears that if other countries place an import ban on India, it might lead to heavy revenue losses for them. Yokohama will suffer a staggering blow to their capacity utilization if there is a restriction on Indian imports. Apart from that, domestic tyre companies also export around 20% of their production. If other countries decide to restrict tyre trade with India, it will lead to a revenue loss of Rs. 12,000 crore to Indian manufacturers.

While the import ban was a result of the economic turmoil due to the recession, it doesn’t look sustainable in the long term, as suggested by experts in the Industry. Hopefully, the government will revoke it soon as the markets stabilise post the vaccine rollout,” says a Mumbai-based tyre industry official. Even though the move was made keeping in mind the predicament of the Indian tyre manufacturers, there’s no certainty whether the move is good or bad. MNCs will now have to rethink their investment plans in the country while domestic manufacturers can experience high production utilization over the long-term.